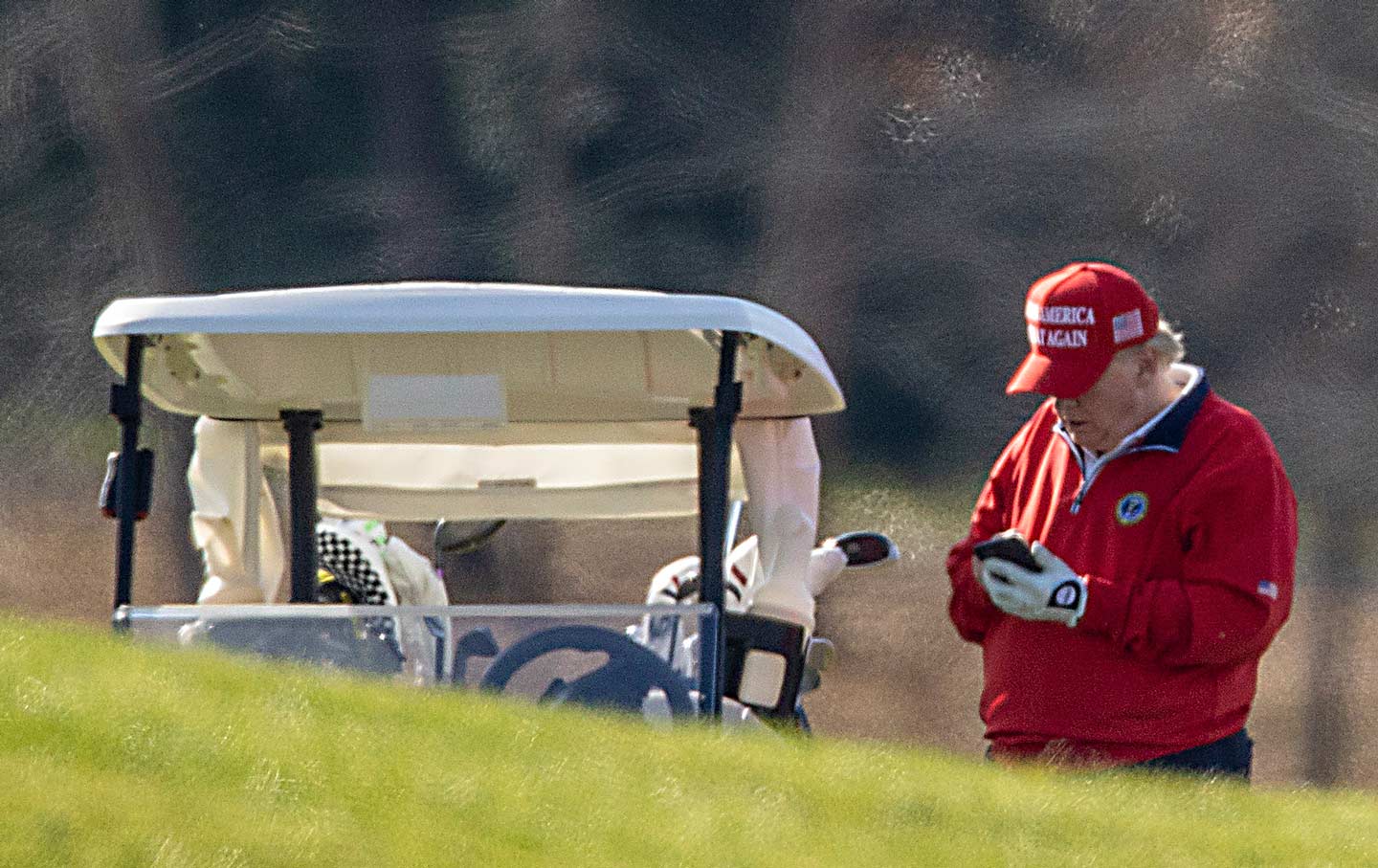 President Donald Trump on his phone while at the Trump National Golf Club on November 26, 2020. (Tasos Katopodis / Getty Images)

The Nation is reader supported: Chip in $10 or more to help us continue to write about the issues that matter.

Did you know you can support The Nation by drinking wine?

Donald Trump has lost the popular vote by more than 6.25 million ballots. Court decisions, recounts, and state certifications have confirmed that the Republican secured just 232 electoral votes to 306 for Democrat Joe Biden. Despite Trump’s false claim that “the 2020 Election was a total scam,” he’s on his way out of office.

Unfortunately, a slow process of transition allows lame-duck presidents to do great damage during the two and a half months between Election Day in November and Inauguration Day in January, and Trump is already at it. But the greatest danger the soon-to-be-former president poses may be to the honest discourse that remains the lifeblood of American democracy: a free press.

Trump’s presidency can be understood as a four-year assault on journalism, in which he has attacked individual reporters, newspapers, and television news networks with a fury that was evident on Thanksgiving Day, when he held a deranged press conference—while seated at a “kid’s table” desk—and started ranting in response to Reuters White House correspondent Jeff Mason’s question about when Trump might finally concede his loss. “Don’t talk to me that way,” raged Trump. “You’re just a lightweight. Don’t talk to me [like] that—I’m the president of the United States. Don’t ever talk to the president that way.”

Trump’s tantrum produced a mocking Twitter hashtag—#DiaperDon—that trended to the top of social media and embarrassed the egomaniacal president to such an extent that he snapped and raged—falsely: “Twitter is sending out totally false ‘Trends;’ that have absolutely nothing to do with what is really trending in the world. They make it up, and only negative ‘stuff.’” Then he tweeted something that should unsettle everyone who understands the role of social media in modern political communications: “For purposes of National Security, Section 230 must be immediately terminated!!!”

Crafted by Congress in 1996, Section 230 declares, “No provider or user of an interactive computer service shall be treated as the publisher or speaker of any information provided by another information content provider.” As the Electronic Frontier Foundation explains, “It shields websites from legal liability for the material users post on their platforms. Section 230 also gives these sites the leeway they need to moderate content that violates their community standards.”

Trump doesn’t like that moderation, as it identifies his lies. In July, the Trump administration petitioned the Federal Communications Commission—where a 3-2 Republican majority has frequently done the president’s bidding—with a demand that commissioners craft a rule that could gut Section 230 protections. That’s incredibly dangerous.

“If the FCC grants the administration’s proposal, no websites or platforms would be able to set their own standards for their online communities,” explains Gaurav Laroia, the senior counsel for the grassroots media and democracy group Free Press. “It would seriously threaten the ability of marginalized groups to organize and express their views without the government forcing them to allow racist and sexist interlopers into every conversation. It would leave sites little choice but to drown in posts from bigots, propagandists, conspiracy theorists and trolls.”

Vigilance is going to be required on every front to reduce the harm that Trump can do before January 20. But defenders of the honest discourse that underpins democracy should be especially alert to the threat posed by the prospect that Trump’s FCC minions might respond to a presidential fit of pique by scheming to undermine the ability of social media to call out presidential lies.