The EU is considering two-tier legislation to impose greater responsibility on Big Tech over removal of illegal content and the fight against counterfeit products in the first overhaul of the bloc’s internet rules in two decades.

The bloc’s preferred option is to adopt “asymmetric measures” where more is demanded from Big Tech to enforce policing of online services and the smooth functioning of cross-border digital services, officials in Brussels said.

The move comes as groups such as Facebook and Google are accused of using their clout to undermine European rivals and confirms Big Tech’s worst fears that the rules will hit them harder.

“Asymmetric measures with stronger obligations for very large platforms, further clarifications of the liability regime for online intermediaries and EU governance with reinforced oversight and enforcement . . . [is] the preferred option,” a leaked document said.

Big Tech, mostly Silicon Valley-based groups, are likely to see this move as an escalation of aggressive steps in Brussels to regulate the large online platforms, seen as “too big to care” by EU commissioner Thierry Breton. 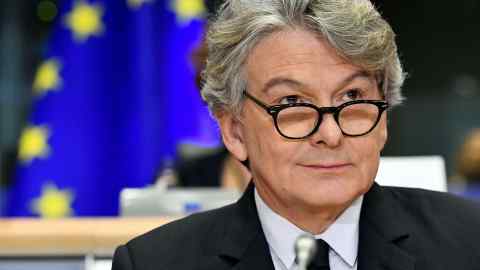 The summary did not expand on how the sliding scale of responsibilities would work or how it would determine which platforms needed to comply with tougher rules. However, regulators are setting criteria to define gatekeeper platforms, including the number of EU countries they trade in, size of revenues and number of users.

Regulators warned European citizens were exposed to a growing number of risks online but particularly on “very large platforms” given their power to reach billions of users. The confidential document said the policing of digital services was “to a large extent uncoordinated and ineffective” in the bloc. It also said that piecemeal legislation driven by each member state had acted as a block to the proper functioning of the single market, giving large incumbents a “competitive advantage”.

The release of draft legislation has been delayed twice and it is now scheduled for December 15 but some EU officials have warned that the timing could still slip into 2021.